The Charest lab at the Université de Montréal uses visual objects as a proxy to study aspects of cognition such as perception, consciousness, memory, and decision making.

We use neuroimaging techniques such as functional Magnetic Resonance Imaging (fMRI) and Magneto-Electroencephalography(M-EEG), combined with psychophysical experiments of vision to investigate the brain mechanisms behind these cognitive processes, with a focus on honouring individual representational idiosyncrasies. We also use deep learning and machine learning to further characterise cognition and the brain.

After fifteen years in the United Kingdom, Dr Ian Charest takes on a new position as Assistant Professor at the Université de Montréal. Having secured a Courtois Foundation Chair in cognitive and computational neuroscience, and an NSERC discovery grant, the lab is very excited with this new adventure.

We presented our latest work via posters, and talks. If you didn't make it to VSS, and would like to check out what we presented, see this GitHub Repo

The lab is happy to welcome Lara Oliel. Lara is currently completing a Masters degree in Integrative Biology and Physiology at the Sorbonne University Pierre and Marie Curie Campus. She joins the lab to gain experience in cognitive neuroscience and will help with various current projects.

The lab is happy to welcome Yifan Xu, who is joining to work on the neurocognitive mechanisms of emotion recognition.

The lab is happy to welcome Christina Dimitriadou. Christina will work on collecting an important multimodal

dataset with several cognitive tasks in EEG, fMRI, and behaviour.

The lab is looking for bright, motivated individuals interested in doing a PhD in the context of the START ERC Grant.

More details on the topic of the position and on how to apply can be found here: PhD position

The lab attended the 22nd internatinal conference of the Association for the Scientific study of consciousness.

This was a great conference, held in the wonderful city of Krakow, Poland. Thanks to the organisers for their efforts.

Ludwig Barbaro joins the lab to work on the ERC START grant.

Ludwig is an expert in fMRI, and M/EEG, studies of vision and attention.

Jasper is an expert in fMRI, M/EEG, and web-based experiments.

START, or "Spatio-Temporal Attention and Representation Tracking" is the latest funded programme of work in the lab. The research programme will be funded by the European Research Council for the next 5 years and will come with many opportunities for postdoctoral and postgraduate researchers to join the lab.

The research will use neuroimaging techniques such as magneto-electroencephalography (M/EEG), functional magnetic resonance imaging (fMRI), computational modelling, and psychophysical experiments to better understand conscious access to visual objects in the human brain.

Latest pre-print is out!

Check out our latest pre-print out on bioRxiv. This is a result of a collaboration with Radoslaw Cichy

In this project, we studied visual representations in the brain, combining MEEG, fMRI, and a complex behavioural task, to investigate the behavioural relevance of brain activity patterns in space and time. Neural dynamics of real-world object vision that guide behaviour.

We recently attented the visual sciences society in St-Pete Florida, where we presented 3 posters.

The posters/talks cover our research in the temporal dynamics of individually unique object representations, categorical differences in the conscious access to visual objects, and three-way fusion of MEEG/fMRI/behaviour in behaviourally relevant object vision, all using Representational Similarity Analyses.

Everyone is unique, and one challenge of brain imaging is to develop new tools to better understand brain function in individual people.

Honoring the unique response of each individual brain, in each cortical patch or column to each particular stimulus.
Early neuroimaging studies have focusses on analyses or regional-mean activation, averaging across voxels within a region of interest (e.g. a face region), across stimuli within a given category (e.g. a individual faces), and across individual subjects (black circle above). The field has begun to honour these distinctions, by analysing patterns of activity within each region, responses to single exemplar images, and the variation across individuals. However, only recently have all these components of progress been combined (red circle) in a single study.

We recently extended and replicated these fMRI results using decoding techniques applied to EEG data, and presented some preliminary results at the Vision Sciences Society conference.

Here is the poster that we presented there:
Revealing the temporal dynamics of individually unique object representations

An additional aim of brain science, is to explain brain function and relate it to human behaviour. In the lab, we commonly use the multiple arrangements task [Kriegeskorte et al. 2012;Mur et al. 2013;Charest et al. 2014 ] to relate representational dissimilarity matrices (RDMs) constructed from brain activity patterns, to RDMs generated from this behavioural task. 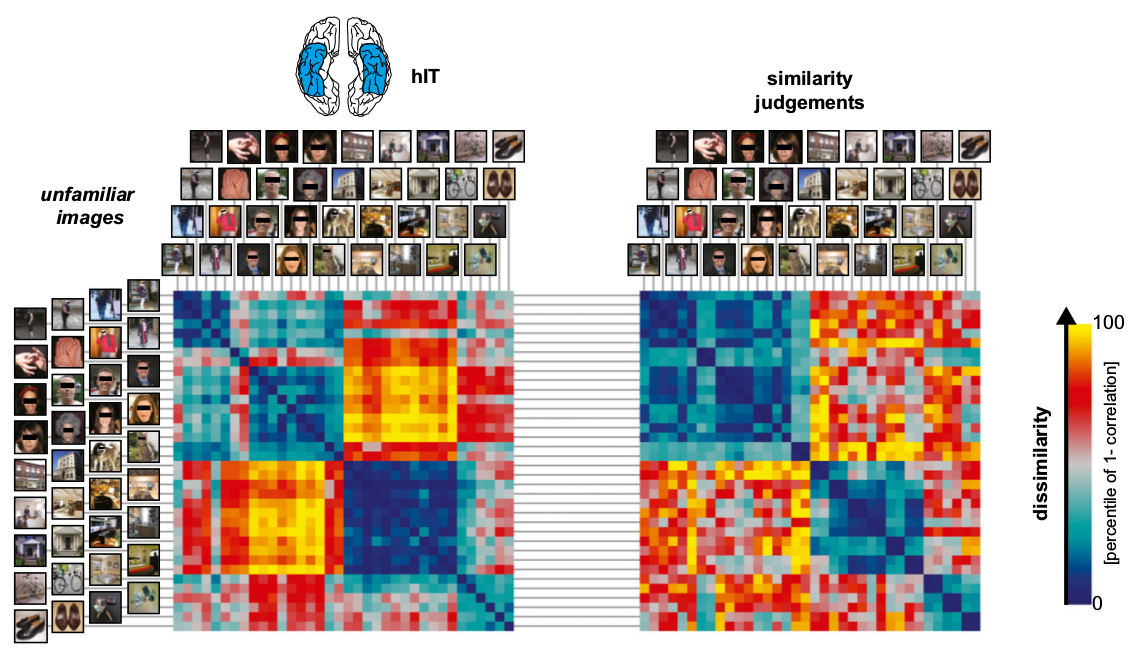 To facilitate access to behavioural tasks like the multiple arrangements, together with Nikolaus Kriegeskorte and Jasper van den Bosch, we created an online platform, Meadows. Meadows aims to streamline the collection of behavioural data, allowing fast access to judgements for images, videos and sounds, in a few clicks. Here is the link to start your own experiments: https://meadows-research/com

An additional focus of the lab, is to investigate higher-level cognitive processes related to attention and consciousness, in object recognition. This focus will be funded from January 2018 by an European Research Council Starting Grant for the next five years.

Here is the poster that Daniel presented at the Vision Sciences Society conference:
Categorical differences in the conscious access to visual objects